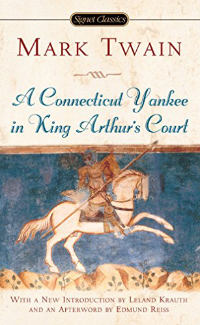 Some funny parts. Some thought-provoking parts. A little wandering. A little long. A bit abrupt ending. But, how do you end this?!

Some quotes I noted:

“Intellectual ‘work’ is misnamed; it is a pleasure, a dissipation, and is its own highest reward. The poorest paid architect, engineer, general, author, sculptor, painter, lecturer, advocate, legislator, actor, preacher, singer, is constructively in heaven when he is at work; and as for the magician with the fiddle-bow in his hand, who sits in the midst of a great orchestra with the ebbing and flowing tides of divine sound washing over him - why, certainly he is at work, if you wish to call it that, but […], it’s a sarcasm just the same. The law of work does seem utterly unfair - but there it is, and nothing can change it: the higher the pay in enjoyment the worker gets out of it, the higher shall be his pay in cash also.”

“There was a slight noise from the direction of the dim corner where the ladder was. It was the king descending. I could see that he was bearing something in one arm, and assisting himself with the other. He came forward into the light; upon his breast lay a slender girl of fifteen. She was but half conscious; she was dying of smallpox. Here was heroism at its last and loftiest possibility, its utmost summit; this was challenging death in the open field unarmed, with all the odds against the challenger, no reward set upon the contest, and no admiring world in silks and cloth of gold to gaze and applaud; and yet the king’s bearing was as serenely brave as it had always been in those cheaper contests where knight meets knight in equal fight and clothed in protecting steel. He was great now; sublimely great. The rude statues of his ancestors in his palace should have an addition—I would see to that; and it would not be a mailed king killing a giant or a dragon, like the rest, it would be a king in commoner’s garb bearing death in his arms that a peasant mother might look her last upon her child and be comforted.”