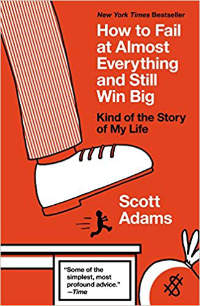 Scott repeats many times that he’s bombed most of the enterprises he’s begun. He still tries to find a learning that will add to his toolset on the next one. He puts himself where he thinks he’ll find luck – he’s very mathematical about it, thinking in statistical terms about what is more likely to succeed. He thinks goals are for losers. Instead systems are general patterns that will help you roll with the variation in life and react to failure. He is for playing to your strengths. He feels that every skill you add to yourself multiplies your effectiveness and usefulness. There are several skills he thinks are especially important, including speaking and writing, even voice training. He believes in the power of positive affirmations, which have affected him in his life several times in significant ways. He’s very much into being “selfish” and taking care of oneself through nutrition, exercise, and time so that one is then more ready to be useful to others.

The book was a wide-ranging survey of many topics. It really read more like a series of blog posts with some threads of themes. It was pretty good. Dilbert as a comic is hilarious. My dad always liked it, so I’ve read quite a few. Thankfully, my own corporate life has had only hints of the Dilbert office punchlines. But this book was my first of Scott’s to have read. I didn’t appreciate his foul language, which was unexpected after reading the comments.