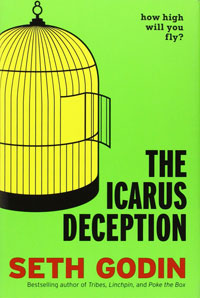 Seth challenges us to think of what we’re afraid of – what keeps us back from doing the work and making the art that we really want to. In the myth of Icarus, we’re shown that obedience to authority and not exceling beyond reasonable limits will lead to our continued existence. Seth asserts this is a deception given to us by the industrialists, a moniker given to that group of people who have built factories and molded replaceable humans, lulling them into an existence of dependency where they don’t fly too high but instead contribute to the industrialists’ own aggrandizement. Seth tries to get us to make art – more art, better art. Art, being defined in a broad sense of what is weird work and especially what we want to gift the world. He argues that in today’s connection economy, this is really the only new path to thriving.