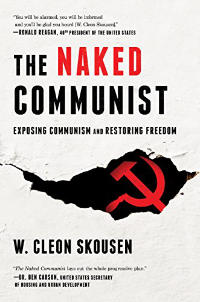 With communism and socialism back in the conversation the United States, I wanted to read a book from someone who was well exposed and well informed the last time it was a big deal. Skousen produced this volume, and it was core reading at the FBI for anyone trying to figure out the communist motivation and mind.

The most vivid and succinct view that I got of what communism is and how it has and will affect the world is from the “45 Communist Goals” that are from the book and which Congressman Albert S. Herlong Jr. read into the Congressional Record in 1963. The list is frankly appalling. Perhaps more than the intent listed is the familiarity with many of these items, observed in my short life and from my (previously thought) removed vantage point. Is communism the source of so many of these evils? Maybe not the source, but is communism the supporter of so many of these evils? It seems to be. The author quotes their own words. And thus it becomes outrageous to see support of it for any of the other supposed goods it might bring.

Notably, communism pushes for the undermining of institutions in politics and journalism, fomenting of violence between peoples, encouraging the breakdown of moral standards and promulgating the meaningless, obscene and ugly. These are the goals and too-often the fruits of communism. To have it thus exposed is to remove from it the opportunity for its reasonable support. And thank goodness.