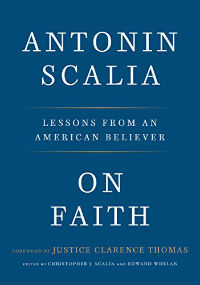 The book was fantastic. I love hearing about Justic Scalia’s firmness in His faith in Christ and in his church. To read a little on how this devout man lived his personal life and contributed in the public sphere in the nation’s highest court was very interesting. I love that he did both.

He makes it a point that he ruled on cases according to his reading of text, his most objective arguments, and according the jurisprudence and norms of society available to him. His determination to do just that is a great showing of his personal integrity.

In the book he makes the point in several speeches that the American tradition encourages religion. It doesn’t favor or dissuade against any on sect. It treats them all equally, but it does encourage religion. Over different passages he points out the gratitude to and reliance on God by many founders during the founding era of the nation. He points to the political institutions that begin with non-denominational prayer and supplications to God for support of the nation. He references a number of founders and politicians who point to a religious people as the surest way to support the Republic through a moral people. In an era where the Establishment Clause of the first amendment is often interpreted to mean freedom from religion, banishing from public to private life only, this renewing of original intent and the centuries-long tradition of religion in our country to this point was refreshing.

The book includes several excerpts from opinions the Justice wrote in the high court relating to faith and religion. His opinions seem sharp, logical, and also witty and approachable. Since reading the book and learning a little more about this remarkable man of faith and law, that seems to describe him as well.