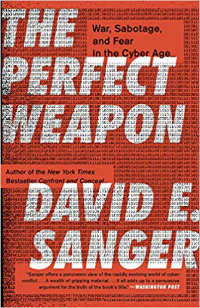 This is mostly journalistic account detailing the major cyber security incidents that have occurred from Stuxnet on. From the book, it is clear that Mr. Sanger has been a NY Time correspondent in the arena of national security for quite some time. He has seen much. He details the creation of US Cyber Command, which conducts war on behalf of the nation in the relatively-new realm of cyberspace. In the book, you learn how many other nations of have followed suit and have their equivalent organizations. These days, the cyber world is a constant chaos of incursions, cat and mouse, just below the level of hot war.

Much of the the potential for cyberspace to be potent in war was revealed after the US campaign against Iran to push back their progress in developing nuclear weapons. The Stuxnet worm used to knock out their centrifuge hardware got into the wild and was studied for its purpose and origin. After that, the leaks about secret programs in the cyber realm were given to the world by Edward Snowden. This did much to tip the hand of the US, not just in its surprising domestic surveillance programs, but in its capabilities and strategies deployed against foreign adversaries. After these revelations, many countries joyed the fray in the cyber realm and advanced their capabilities for cyber warfare.

Thus, at the end of the book, the outlook is somewhat bleak. We’re really in the pioneering days of what kind of destruction can be affected from cyberspace. Innovations in warfare and other nefarious purposes will likely follow. There’s much to anticipate.