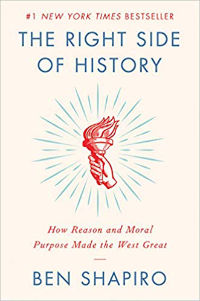 When “Western civilization” is mentioned, what does that mean, and where did it come from? Shapiro concisely draws its origins from 2 sources: Jerusalem and Athens. Jerusalem as the center city of the Bible, where we are taught that life has a purpose and that each individual is of great worth. Athens as the center of ancient Greek thought, where we’re taught that man can use reason to discover purpose and decide how to best act for the highest good.

How healthy is the foundation of Western civ today? The pinnacle of Western civ was the founding of the American nation, embodied in the Declaration of Independence and Constitution. It acknowledges as a required foundation that flows from Athens and Jerusalem. It provides for and relies on a society with individual and collective purpose and capacity.

But today people are proclaiming the evil of Western civ and the need to replace it. This accompanies a growing feeling of purposelessness. Shapiro goes back and gives the evolution of how we got here. There have been philosophers, politicians, activists, and leaders of society that have been pushing toward this point for centuries. They have felt that purpose would be better found in other ways.

A key departure has been to remove God from purpose. It has been argued that God does not exist, have expectations, and that the belief in Him has kept men blind and subservient. Without God, men could live in a real age of reason. But, it turns out, this reason was unbounded by a moral code.

Maybe by a focus on the collective good, we could find purpose. But the general will is hard to determine without a moral compass. And respect for the individual, now lacking inherent value, is lost, and he is abused.

Maybe a pursuit of technological advancement and science could prove purposeful. But huge gains in scientific understanding without moral guidance in the first half of the 20th century led to toil and the death of tens of millions.

After the war, interestingly, relativism rose. Everyone could find their own purpose in what felt right, because there could no longer be an objective good.

This led to the elevating of the individual again, with a value on self-esteem above all others.

This set the stage for what we see today: a return to paganism, divided into tribes, in chaos, disillusioned by the lack of purpose. Individuals adrift don’t feel particularly guided by purpose. We seek purpose in the tribes we join, but relativism and lack of objective truth or even better ideas, has thrown us into a war where ideas don’t matter – we deny reality and argue with passion. We seek blindly for purpose, warring with the groups around us. There is chanting to tear it all down – that the structures today are merely repressive, built that way from the foundation.

Instead, it seems like we have evolved from and forgotten the foundation that made us great in the first place. And not just great: Our time and place in history is unequaled. Western civ, flowing from Jerusalem and Athens, has been its foundation.

So, what do we do from here? We teach our children. We teach them that life has a purpose, God cares about how they act, they are responsible to Him, they are actors in life, they have a gratitude for their ancestors and a responsibility to carry these blessings to the next generation.