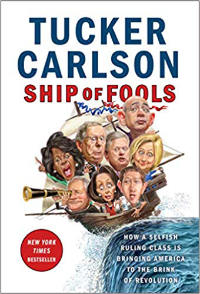 Sometimes you look around and wonder, where is all this coming from? Issues of illegal immigration, ongoing wars, shutting down alternative opinions, diversity as the first virtue, abortion of our children, and climate change are common mega issues in media coverage, political debate, and even giving meaning to local society and personal relationships. It’s everywhere. It’s constant. Pick an issue and get swept up in it.

Tucker looks an older, more classic liberalism: the movements to stand up for the common man of labor, to provide equal opportunity for all, to protect wages from mass immgration, to avoid war and conflict, to encourage freedom of speech and the free exchange of ideas, to integrate all people in a society together, and to clean up the planet. He asks where the champions of these issues, which he observed in his earlier years, have gone. He proposes that they have converged into a ruling class.

The liberal and conservative parties, Democrat and Republican, have essentially merged being driven by the same master. They have financial incentive through the same corporate funders and lobbyists. They have political incentive to maintain a status quo and not pay attention to real problems that indicate their failure in policy and governing. I hadn’t considered this convergence before. But it’s a theory that makes a bit of sense, and he has some interesting observations and citations in the book about this issues. If America really was on the brink of losing its democratic foundation, it’d be the rulers, the governmental leaders that would either shine a light on it to fix it or play a distracting shell game to prolong their rule for at least a little longer.

Given the swirl of issues and changing values, I’m leaning toward distraction being the current tool.