Dan Abramov coined the terms Smart and Dumb components. Later, he called them Container and Presentational components. I still call them Smart and Dumb. It’s shorter and sits in my mind easier. How do you identify them? Why would you want a separation? What might that separation look like? Here are a few ideas.

So what sets these components apart? Smart means “container” or “app-level”. Some have compared it to the “C” in MVC. Dumb means “presentational” or “ui only”, possibly comparable to the “V” in MVC. Here’s a breakdown of a few key characteristics:

Apparently you need each class of components because obviously your app has to smart to be interesting. But if it’s more dumb, it’s more simple. So split it. You need both.

If you separate concerns, your app will be easier to reason about, complexity will be mostly localized around the Smart components, and you should be left with more simple components. UI components will be more reusable.

Where to Split Smart and Dumb Components?

But how should you make that split? Here are a couple ideas. These are observations of how I’ve found myself making the split and what it ends up looking like.

If the Dumb component does anything interesting, it usually will fan out at that point and start farming props off to the child components that actually need them. Thus, the hierarchy deepens before it actually ends up doing work. 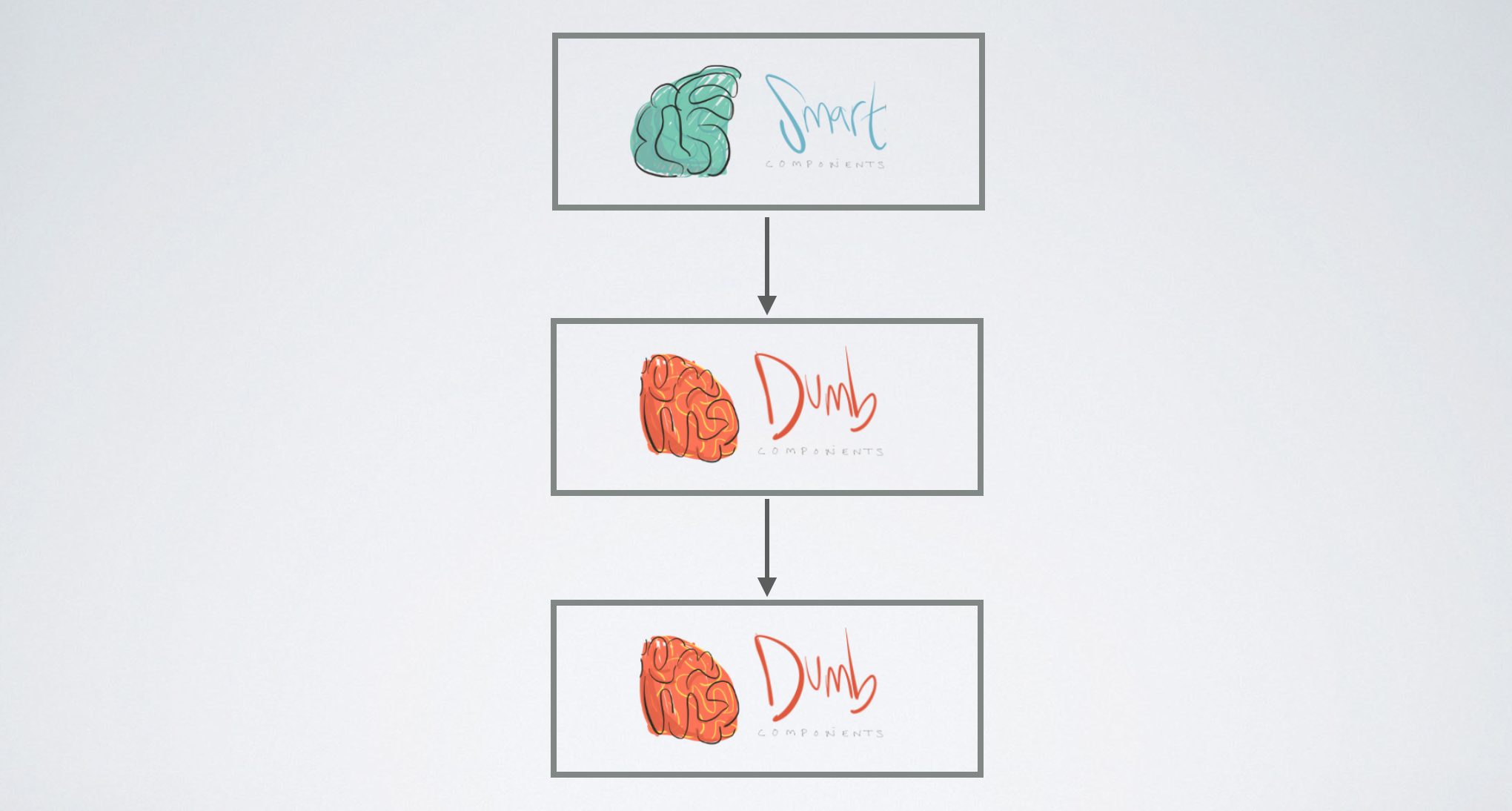 “Broad” describes the transition from Smart to Dumb happening sooner. There is one Smart component that has many Dumb component children. There aren’t necessarily fewer interesting things here or props to pass, but they’re scattered out, going straighter to the components that need them instead of going through some Monolith Proxy Dumb component (all the bad words together).

A highlight advantage here is that there is much readier access to the Smart component’s smarts – store data, event handlers, and actions. You don’t feel like you’re passing props through components only to get them to the components that really use them.

A golden quote from Dan Abramov that highlights this is:

When you notice that some components don’t use the props they receive but merely forward them down and you have to rewire all those intermediate components any time the children need more data, it’s a good time to introduce some container components.

In his quote, Dan recognizes the time to introduce container components. In my mind, “container” means Smart. Here, I don’t think we necessarily require a Smart Container, because we usually like to get as Dumb as we can as fast as we can. So, how about a Dumb component that just provides containment?

We can provide DOM markup, component grouping, layout, or other UI abstractions with components that take props.children. These children are usually components, of type React.PropTypes.node. Doubtless we’ve all realized by now that there’s just one props.children. But component can only wrap one thing, right? Well, this is in the syntax of markup/JSX, but this isn’t true inside the Component. We could have more attributes that pass PropTypes.node arguments. This allows for containing more nodes and having convenient handles on them within components.

This thought was revelatory at the time it occurred to me. Looking back, it seems obvious. But for some reason, probably because I still think of it as HTML sometimes, it feels funny to write something like:

Then inside the Dumb component, we can display those attributes directly:

What to Pass as Props?

If we have a split we like, now we have to decide what props to send from the parent to the child components.

Yes, you could just send all the parent’s props to the child. I would do this when the parent feels just like a wrapper. It’s a passthrough. Perhaps it adds something small and targeted. It’s a higher-order component.

You can pass the whole nested reducer state, sure. Almost every time I feel myself wanting to do this, I think it’s motivated by laziness. It has a potential downside of tying the reducer format to the view in more places than required. Of course, if you have custom selectors for everything anyway, you make your break from reducer format coupling there.

This is most commonly what passing variables to children components looks like. These values are usually primitives, but they can you can send down entire new object structures as well. It has the advantages of being explicit and traceable. It also avoids the coupling of passing entire nested reducers.

In all design decisions, it’s good to have some quick guidelines in mind when making decision. So relative to splitting Smart and Dumb components, here’s a rule of thumb.

On many of my projects recently, I use two decorators that help identify Smart and Dumb components:

For Smart, the redux-react-connect-by-name component facilitates data fetching from the redux store. This is equivalent to using redux’s vanilla connect with some built-in niceties.

For Dumb, the react-styleable component allows passing CSS modules into React components. This is how I like to give my components styling information.

If one is for Smart and the other for Dumb, then I can usually identify a potential split if I ever see them together. For example, this is what that antipattern might look like:

The idea of Smart vs. Dumb components is, itself, just a guideline – a Pirates’ Code-level of guideline. Keep it and use it where it helps your project. This is an art form. No one has the best answer for how to organize your React views. Do the best you can. Then, next week, when you find a better way, advance to that.

What are some other observations that you’ve made when splitting your views into Smart and Dumb components?

Adapted from a meetup talk: